Grace Nickel’s report on her residency in Taiwan: September 27 to November 14, 2003

Although it usually takes many months and often years to fully realize the benefits of an experience like the one I had in Taiwan, I will attempt to express from the vantage point of having returned in mid-November, the immediate value of my participation in the Large Outdoor Ceramic Lantern Festival which was organized by the Taipei County Yingge Ceramic Museum. 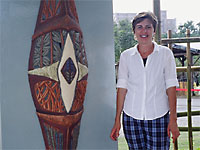 This was my second trip to Asia and once again I found it to be incredibly inspiring. Upon arrival, you instantly become aware of the long tradition of pottery, the culture of tea and all of the ceramics, both handmade and factory produced, that are involved in “the way of tea.” The respect for the ceramic medium, the public support for ceramics and the beautiful galleries and museums exhibiting both historic and contemporary ceramics are refreshing and encouraging to see.

On a technical level, the challenge of creating a two metre tall lantern in clay in five weeks was daunting, to say the least. The unfamiliarity of the materials and kilns, the language barrier, the climate and the shortage of time were all realities to be reckoned with. Completing a piece of this scale in clay is difficult in the most familiar of circumstances, let alone in a country with extreme heat, 100% humidity and unforgiving clay bodies. I am happy to say that I was able to rise to the technical challenge and completed a successful piece in the time allotted. In addition to the technical challenge, perhaps the greater test was to remain calm and behave professionally throughout, despite the extreme pressure and the relentless work ethic required to finish the lantern in time for the festival in Yingge. As the only Canadian participating in the residency, I feel I represented my city and my country admirably. There were many times when I felt like I was in the Olympics, or perhaps, participating in an episode of Survivor!

We initially worked at the Tainan College of the Arts in southern Taiwan for five weeks creating our lanterns, then we travelled up north to Yingge, just outside of Taipei, to participate in the Taipei County Yingge Ceramics Museum’s ceramic festival. Being exposed to the beauty of the landscape and the lush vegetation in southern Taiwan, which is more tropical in climate than the northern part of the island, had a profound impact on the motifs I used to embellish my lantern. Initially inspired by the shape of the paper jack-o’-lanterns we made as children for Halloween, my lantern took on a large shield-like shape, tapering to points at both ends. In addition to the organic imagery I used in the lantern, I was inadvertently influenced by the many cut-out windows in the architecture that surrounded me. These open-work windows in the modern architecture refer to the ancient Chinese wooden windows that are intricately carved with beautiful fretwork. Although not initially aware of this direct influence on my work, one of the students at the college pointed out to me that the cut-out pattern I created to allow light to flow through my lantern very much reminded her of the old wooden Chinese windows. This was a welcome comment, as it fit perfectly with my ongoing investigation of combining the natural and the human-made, the organic and the architectural.

At the festival, we exhibited our lanterns and conducted demonstrations for the visiting public. Tens of thousands of people attended the festival over a ten day period. The lighting of the lanterns took place on the final evening of the ceramic festival. Although all the artists were pretty tattered and exhausted by this point, it was an exhilarating moment. The formal exhibition of the large lanterns will take place in Taipei during the celebrations of the Chinese Lantern Festival in February. I was also pleased to be informed while in Taiwan that I was one of 105 artists to have work selected for the 1st Taiwan Ceramic Biennale which opens at the Taipei County Yingge Museum on February 13, 2004.

After the festival ended, I was thrilled to have four days to myself in the city of Taipei. In Taipei I visited the National Palace Museum, the new Museum of Contemporary Art, the National Museum of History and the Taipei Museum of Fine Arts. I have had my work exhibited in the last two and the National Museum of History purchased one of my pieces for its permanent collection in 1993. A highlight of my stay in Taipei was meeting the famous and charismatic ceramic artist Ah Leon. He is known and respected worldwide for his phenomenal ability to “fool the eye.” With inspiration from the Taiwanese tradition of imitating wood and bamboo in clay, Ah Leon has expanded upon this concept in a beautifully creative and superbly skilled way. I visited his studio twice and also had the privilege of seeing the home of one of Ah Leon’s most avid collectors. This experience was riveting!

I could go on, but for now I will conclude this narrative. I will need more time to process the whole experience. As wonderful and as difficult as these overseas opportunities may be, I know that they are invaluable and imperative to my growth as an artist and as an individual. In closing I would like to thank the Manitoba Crafts Council for its support through the Manitoba Crafts Guild Bursary Fund. I cannot stress enough how critical it is for artists to be given the opportunity to travel.